In March this year, the Seattle office of the FBI warmed that a cyberattack group known as FIN7 had targeted several companies using social engineering attacks. Until then, the group had been thought to be inactive.

Until then, this group had been financially motivated, and tended to carry out highly complex attacks. In fact, some sources have named the group Carbanak because of the malware it uses, which has the same name; we already addressed these advanced Living-off-the-Land attacks in a previous article. However, several cybersecurity analysts believe they could be two separate groups.

In this cyberattack, the group targeted top management, human resources, and the IT department in several major companies. However, this time they did not use a traditional phishing campaign, with email as an attack vector; instead, they used an ingenious social engineering technique, combining physical and digital bait. To do this, they followed these steps: 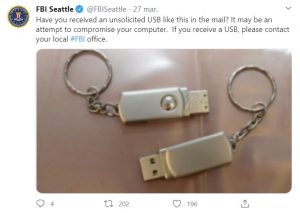 CISOs and heads of cybersecurity in large organizations often say that the first firewall or barrier against cyberattacks are the employees of an organization. In a case such as this, where the cyberattack uses physical means to carry out social engineering, it is clear: the pen drive contains complex technological elements and a piece of advanced malware called GRIFFON. However, if employees have doubts about where it has come from and don’t plug it in, it cannot run. This is why all staff at an organization should be aware of the fact that they shouldn’t, as a general rule, trust external physical devices, unless they are absolutely sure that they are legitimate.

However, this may not be enough; organizations need to have the support of advanced solutions that follow the same premise. In this sense, Cytomic clients have a zero-trust approach for all the applications they try to run on their endpoints; they are blocked until the can be validated by the Zero-Trust Application Service.

Cytomic EPDR includes this service, but it also integrates a full stack of preventive endpoint technologies into a single solution, with EDR capabilities that prevent, detect, and respond to any kind of known or unknown malware, as well as fileless and malwareless attacks. This way, even if cyberattackers use technologies that make their attack vectors seem legitimate (as FIN7 did by using USB keyboard emulators), every endpoint will be monitored and analyzed, since its default position is to assume that anything could be a threat.