IMPORTANT INFORMATION YOU MUST READ BEFORE YOU START

It is critical that you follow this procedure step-by-step and that once you complete it, you verify that all cloned devices are displayed in the web UI.

ATTENTION!
Devices cloned incorrectly affect visibility of monitored actions, impact the reliability of the Advanced Protection and can compromise the security of your infrastructure.

If you only see a single device in the web UI, you must repeat the process, rebuild the gold image and deploy it again to the affected endpoints as soon as possible. For any questions, contact Advanced EPDR/EDR Support Services.

In large networks with many similar computers, you can automate the process to install the operating system and other software with a gold image. This is sometimes referred to as a master image, base image, or clone image. You then deploy the gold image to all computers on the network, which eliminates most of the manual work required to set up a new computer. To generate a gold image, install an up-to-date operating system with all the software that users might need, such as security tools, on a computer on your network.

This article offers a step-by-step walkthrough of how to install Advanced EPDR/EDR solutions on Advanced EPDR/EDR in persistent and non-persistent Virtual Desktop Infrastructure (VDI) environments. Due to their characteristics, virtual computers or instances require that a specific procedure be followed to ensure that the images or templates to be used in virtual environments are up to date, optimized, and don’t have a previously assigned machine ID so that, when a virtual computer is started, it is uniquely registered in the Web console.

Generally, the procedure described in this document works* with the following types of virtual machines:

*Bear in mind the considerations at the beginning of the article.

In a persistent VDI environment, the information stored on a computer hard disk persists between restarts. Therefore, to create a template you only have to configure updates of the Advanced EPDR/EDR Endpoint Security protection. After you install an updated version of the operating system and all programs that users need, create the template.

PHASE I - PREPARE THE MACHINE WHERE THE TEMPLATE IS CREATED

Once the custom template is ready, you can enable the Panda Endpoint Agent service, either with GPO policies for devices within a domain, or through other types of script applications such as Horizon, Windows Logon Scripts, etc. In this example, we explain how to change the Panda Endpoint Agent service’s startup type, using GPO. First, you must create a GPO. To do that, follow these steps: 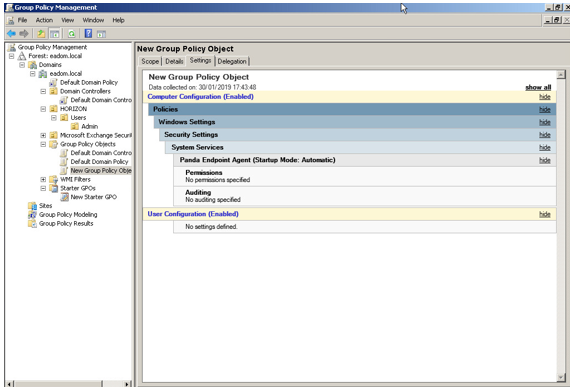 In a non-persistent VDI environment, you create two security settings profiles; one to update the gold image when you prepare it and for maintenance purposes, and one to disable updates when you run the gold image because it does not make sense to update Advanced EDR/EPDR if the computer storage system reverts to its original state with each restart.

PHASE I - PREPARE THE GOLD IMAGE

Before you create the gold image, you must prepare the machine:

Once the custom gold image is ready, you can enable the Panda Endpoint Agent service, either with GPO policies for devices within a domain, or through other types of script applications such as Horizon, Windows Logon Scripts, etc.
In this example, we show you how to change te Panda Endpoint Agent service’s startup type with GPO. First, you must create a GPO. To do so, in the GPO settings, browse to the following path: Computer Configuration, Policies, Windows Settings, Security Settings, System Services, Panda Endpoint Agent. The service will be disabled. Change the setting to Automatic. The service will start automatically on the following reboot and will be integrated in the console. 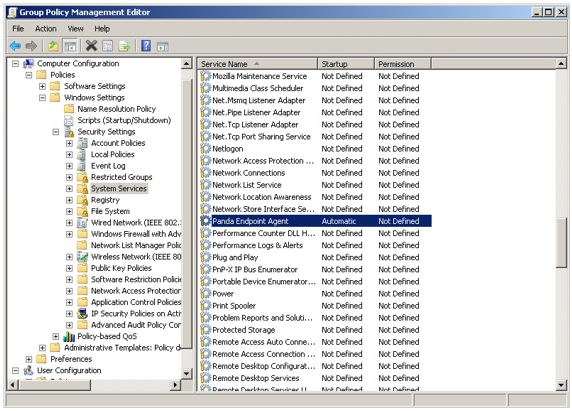 The agent, the protection, and the signatures of the gold image created must be updated frequently, at least once a month. These updates are essential to ensure maximum protection against the new attack techniques developed by hackers. Follow the steps below to update the gold image:

It is essential to ensure that you have followed the procedure correctly.

IMPORTANT! If you see a single device, you must remove the device from the Computers list and start the procedure from scratch, that is, rebuild the gold image and deploy it again to the affected endpoints.

If the aforementioned process is followed appropriately, that is, if the step to delete the agent ID is performed correctly selecting and clearing the Is a gold image option as indicated, every time a new machine is started, the system will calculate its machine ID and will determine whether the computer is a new computer or an existing one, based on the selected environment.